As a college student, my peers have voiced their frustrations when finding an on-campus studying location that meets their needs. Often times, these spots are occupied, which can result in an extended amount of time looking for a place to work rather than doing actual work. This app design minimizes the time to find a study space and helps students prioritize their time and energy into studying.

This app’s core functionality is to provide a more efficient method to get a study space. I wanted to gain more information on how prevalent this challenge is in students’ school life. I conducted user research to better understand what features to include that would help students most. I conducted interviews and distributed surveys to students and gathered data on their study needs, behaviors, and overall preferences.

Average Time For Students To Find A Study Space

Students had different preferences for available resources and environmental factors.

Students chose by the type of study space, based on the number of people they were with.

Students chose study spaces that were located near them. They liked working near their classes.

All the features have to connect to the key insights that were found during user research. By grouping together student ideas and thoughts, I am able to visually see areas of importance. I achieved this with affinity diagramming and clustering. Using the emerging concepts, I brainstormed feature ideas and mapped it in a Value-Cost Grid to prioritize features. This research method allows me to focus on features that would be most beneficial to students, but easy to accomplish.

Using the research as a guide, I explored different solutions and user flows initially through sketches and low-fidelity wireframes. My goal was for users to book a space quickly with the least amount of screens as possible. This solution allows students to choose a building, filter out spaces based on their preferences, and view a space and its features, which reinforces the user research. I also included a Favorites screen for students to return to spaces they enjoyed most.

I evaluated the low-fidelity wireframes during usability testing to learn of pain points and areas I could improve on. I recruited 10 students and screened for students that primarily studied on-campus. I conducted an online session, where I could watch them interact with the screens and hear real-time comments.

My goals for the testing were to:

Users often commented on the low visibility. To improve this aspect, I maximized the picture to fit the entire card and increased the size of the text. A few users also thought that the distance could be clarified, so I added a visual indicator.

Users are likelier to choose buildings that the algorithm recommends them based on their previous choices, so I enlarged these cards to emphasize that division.

Several users commented on the overloaded feeling they had with this screen. I reconsidered how to display the spaces. Based on the comments, most users already know whether they want a room or a table. Thus, it would be a waste of screen space to show study spaces users are not looking to book. This was improved using a tab feature.

One of the most important features of this app, the resources’ filter, was found to be unnecessarily prominent. Users said that they would prefer a modal.

Users did not view unavailable spaces, so that button was removed.

Instead of a fixed rectangle to display the space, I instead made it comprise the top half of the screen. This solution helps users feel the space better. Adding a “Reviews” tab adds an extra component for students to gauge the space.

The icons were not laid out in an organized manner. The upgrade allows users’ eyes to skim directly across the images to receive the information.

Study Spaces is a daily tool designed to help students find unoccupied work spaces. It’s an app design that considers student preferences for location, resources, environmental considerations, and the type of study space. After multiple rounds of iterations and user testing, the resulting design looks like this: 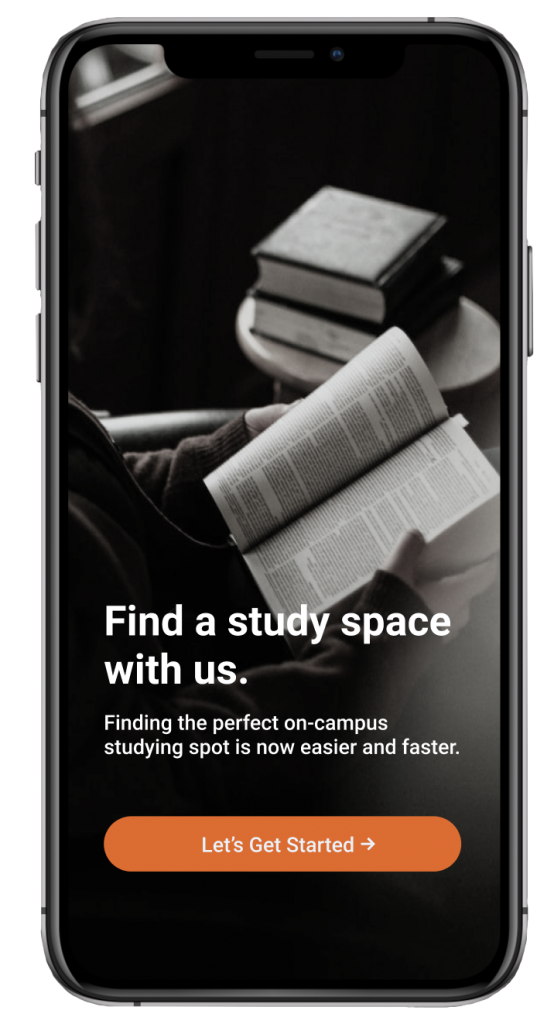 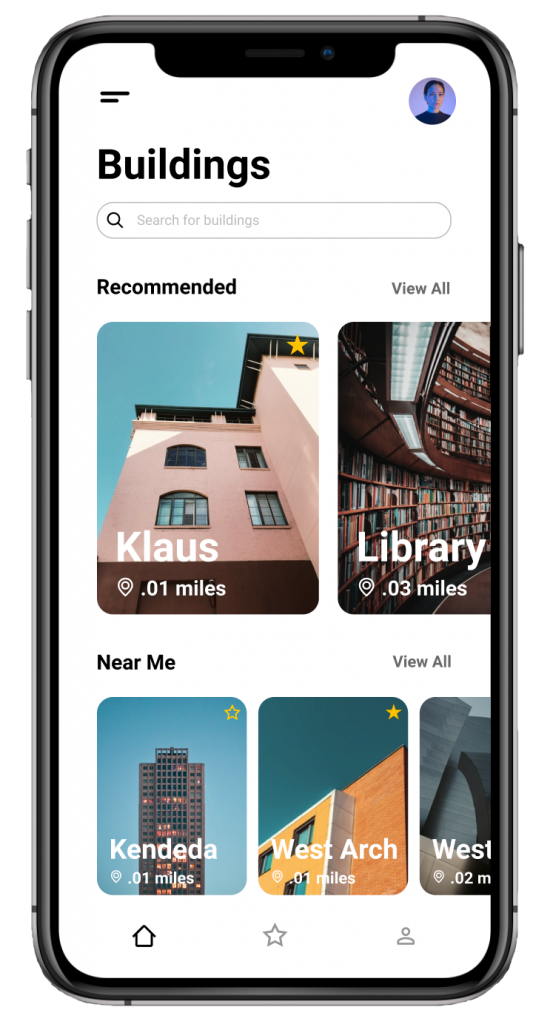 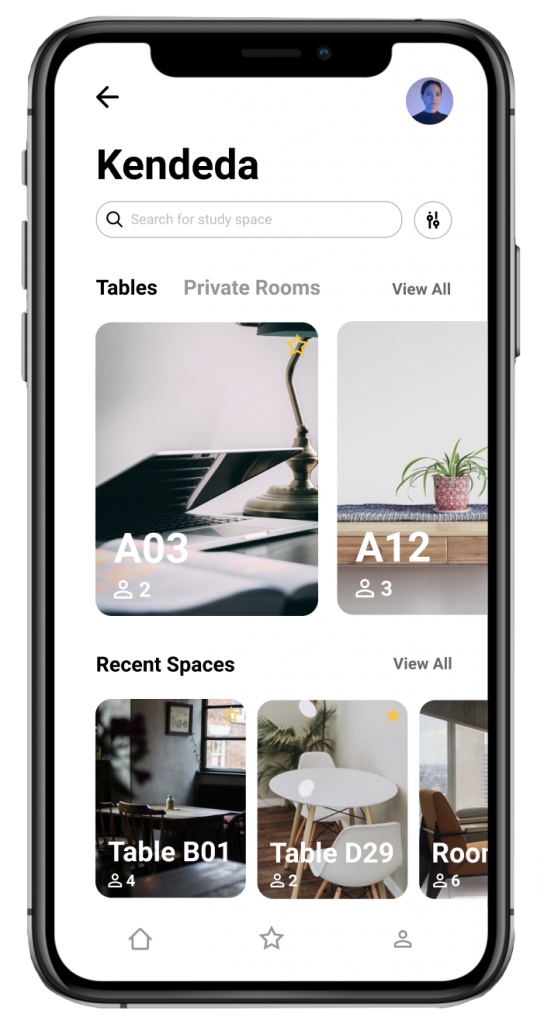 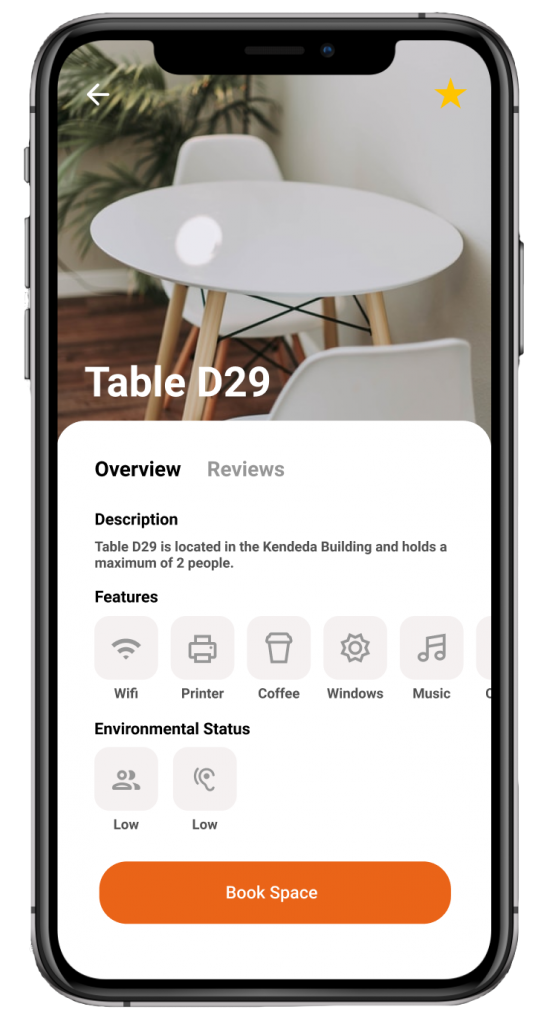 Designing a potential solution to improve a common issue among students was my ultimate goal. To reach it, I learned different UX softwares, new research methods, interviewed students, and iterated my solutions upon further feedback to make better design choices. In this project, I better understood how to always consider the person behind the product.

I would still like to continue testing and improving the design. I will add more screens that allow for full functionality. Ideally, I would like to hand-off the screens to developers and the app be used in conjunction with a tool that can measure seat availability.